Actress Morena Baccarin shot to fame with the TV series, ‘Firefly’. Read on further to know 5 interesting facts about her, including her net worth.

Who is Morena Baccarin?

Morena Baccarin was born on June 2, 1979. The famous Brazilian actress is best known for portraying the role of Inara Serra in the series ‘Firefly’ and her later follow-up film ‘Serenity.’ She also portrayed the role of Adria in the series ‘Stargate SG-1’ and also its sequel film ‘Stargate: The Ark of Truth.’ Baccarin later went on to portray the character of Anna in the 2009 version of the series ‘V’, Vanessa in the comedy film ‘Deadpool’, and also that of Jessica Brody in the Showtime series ‘Homeland’. Baccarin was not only critically acclaimed for her acting, but she also received an Emmy nomination for Outstanding Supporting Actress in a Drama Series in 2013. She is currently playing the part of Dr. Leslie Thompkins in the Fox television series ‘Gotham’. Baccarin married American film producer and director Austin Chick in November 2011. She gave birth to their son, Julius, on October 22, 2013, but the marriage did not last long. Her husband Chick filed for divorce in July 2015, citing irreconcilable differences and on March 18, 2016, Chick and Baccarin were granted a divorce. Baccarin announced that after her divorce is finalized, she will move on in life and marry her Gotham co-star, Ben McKenzie, and also added that she was already pregnant with their child. The couple has a daughter, Frances Laiz Setta Schenkkan, who was born on March 2nd, 2016. Baccarin and McKenzie got married on June 2, 2017, in Brooklyn.

Austin Chick and his former wife Morena Baccarin’s marriage did not last long, and it ended on a sour note following with an ugly custody row regarding their son Julius. They had arguments over passports, plane trips, and also play dates. Chick soon applied for an ’emergency’ custody notification with ex-wife actress Morena Baccarin over their three-year-old son. According to the law, in a custody case of a minor, a parent can ask the court to issue an emergency ex parte order when they feel there is an immediate risk of physical danger or psychological harm to the child. In his custody appeal, Chick requested changes to a 2015 court-ordered custody agreement over their son Julius. He also mentioned that since he and his former wife had gotten into different routines over the past year-and-a-half, until when Baccarin started making things more difficult regarding the child’s visits. Chick stated that Baccarin had been making transitions hard for Julius, and also demanded that he get his son’s passport back with him. Baccarin’s attorney defended his client, saying the move was made only to harass his client. On top of it, the lawyer also requested $3,300 to cover all legal fees. Baccarin currently lives in New York with her fiance and ‘Gotham’ costar Ben McKenzie and their 11-month-old daughter Frances. She was given primary physical custody of Julius in 2015, though she and Chick share legal custody.

Overall net worth of the actress

The net worth of Morena Baccarin is estimated to be around $8 million dollars.

Some facts about Morena Baccarin’s career

Although the personal life of the actress has been a little rocky, her career path has seen smooth sailing over the years. Her career timeline can be divided into a few interesting facts: 1. Film Debut: Baccarin debuted on the big screen with the movie ‘Perfume’ which was released in 2001. It was a film bordering on the comedy genre about the improvised fashion world. Next, Baccarin landed a lead role in the movie ‘Way Off Broadway’ in 2001. 2. First TV Show: 2002 saw Baccarin in her first TV Show, ‘Firefly’. ‘Firefly’ was a science-fiction drama series which did very well. Baccarin was later seen in the reprised role of Inara Serra in the 2005 film, Serenity. 3. Voice Acting: Morena Baccarin has done some voice acting also. In 2005, she rendered her voice for Black Canary in many episodes of the popular animated series, ‘Justice League Unlimited’. She later guest starred in three episodes of the television series ‘The O.C.’ in 2006. 4. Stargate Franchise: It was announced in April 2006 that Baccarin would be playing the adult version of the character Adria, a recurring villain in the tenth season of Stargate SG – 1. She first appeared in season 10’s episode “Counterstrike” as adult Adria of Stargate SG – 1. Baccarin reprised her role as Adria in the movie ‘Stargate: The Ark of Truth’. 5. Her award-winning performance in Homeland: Baccarin next joined the cast of the Showtime television drama, ‘Homeland’, for which she received praise for her role as the conflicted wife of a former prisoner of war. On July 18, 2013, Baccarin was nominated for Outstanding Supporting Actress in a Drama Series at the 2013 Primetime Emmy awards for her performance in ‘Homeland’. 6. Deadpool Franchise: In 2016, Baccarin starred alongside Ryan Reynolds in the hit movie ‘Deadpool’ as Vanessa Carlysle. ‘Deadpool’ was a 2016 American superhero film based on the Marvel Comics character of the same name, distributed by 20th Century Fox. She can also be seen in its sequel ‘Deadpool 2’ slated for release in May this year. ‘Deadpool 2’ is intended to be the eleventh installment in the X-Men film series and a sequel to the 2016 film Deadpool. 7. Gotham: In 2015, Baccarin began a leading role as Dr. Leslie Thompkins in the hit Fox TV show ‘Gotham’. The plot of ‘Gotham’ centers around detective James Gordon who is a new recruit assigned to investigate the murder of Thomas and Martha Wayne. The case acquaints him with the slain couple’s son and future crusader, Bruce. 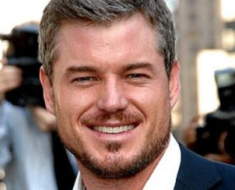 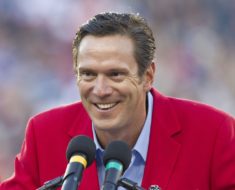