Bobby Cannavale is the whole package. He is a great dad, actor, and is Rose Byrne’s husband. Learn everything you need to know to love this lovable actor.

Bobby Cannavale is a cool (or should i say hot!) 47-years-old. He was born in New Jersey and was raised Catholic. At 8-years-old, Bobby Cannavale secured a role in his school’s production of “The Music Man.” He later secured another role as a gangster in “Guys and Dolls.” These positive experience shaped his adolescence and began the flame of his passion for acting. When he was 13-years-old, Cannavale’s parents divorced. His mother moved the family in Puerto Rico and after two years, they wound up in Florida. In the 1980s he moved back to New Jersey where he finished high school and began pursuing a career in acting. Cannavale had no prior training in acting; he got the hang of acting by performing in the theater. By 1997, he began scoring film roles, such as in the thriller “Bone Collector.” He began gaining more fame when he starred as Bobby Caffey for two seasons in the hit TV show “Third Watch.” The early 2000s had a lot in store for Bobby Cannavale. He appeared in a number of television shows, and then was cast as a recurring character in “Will and Grace.” He played the role of the boyfriend of will Truman (Eric McCormack) named Vince D’Angelo. He won a Primetime Emmy Award for Outstanding Guest Actor in a Comedy Series in 2005. Following his Emmy win, he went on to continue performing in other television shows, including “Snakes on a Plane.” “Will and Grace” in particular rocketed Bobby Cannavale to fame. In 2008, he was nominated for a Tony Award after his role of Dennis in the Broadway play, Mauritius. In 2011, he was nominated for a Tony for his leading role in the Broadway play “The Motherfucker With the Hat” alongside Chris Rock. In 2012 and 2013, he made guest appearances on “Nurse Jackie,” including one with his real-life son. He was nominated for two Prime Time Emmy Awards for his guest appearances on this show. “Nurse Jackie” aired its final episode, the series finale of the 7th season, in 2015.

The couple might as well be husband and wife, they are so well-matched and great together. The pair met in 2012. In 2014 the duo starred alongside each other in the modern remake of “Annie”. In an acceptance speech at the 2013 Emmy’s, Bobby Cannavale thanked Rose, calling her the love of his life. What a dream. Watch his acceptance speech below!

What is Bobby Cannavale up to now?

A dad, a kickass life-partner, and an actor? The magic just keeps coming. The 47-year-old actor continues to expand his horizons with new roles, which he performs with ease and intensity. In 2015, he was cast in the role of Jim Paxton in “Ant-Man.” His character is an officer in the San Francisco Police Department. Jim Paxton is engaged Ant-Man’s ex wife, Maggie. Originally, the actor, Patrick Wilson was supposed to play this part. However, the movie was delayed. Because of that delay, schedule conflicts were created in Patrick Wilson’s work schedule, so Bobby Cannavle was approached. He was talked into doing the film by Paul Rudd and Adam McKay after rewrites of the script were done. Bobby Cannavle reported that he enjoyed his time on set, as he was given the opportunity to improvise, and it was not as overwhelming as some other big-budget movies. Also in 2015, Bobby Cannavale had a part in “Daddy’s Home,” the box-office hit comedy featuring Will Ferrell and Mark Wahlberg. He played a small role as Dr. Emilio Francisco. The movie had a 69 million dollar budget. It was released on Christmas of 2015, and grossed 242.8 million. This movie was Will Ferrell’s highest grossing film of his career. “Daddy’s Home 2” was released in early November of this year. The Christmas-themed sequel to the first hit comedy stars many of the same actors. Bobby Cannavale was not in this film, likely because he has been busy working on other projects.

Bobby Cannavale has got it going on (in looks, and in work!). He is currently gearing up for the release of the newest film, “Ant-Man and the Wasp.” He continues his role has Jim Paxton, an officer in the San Francisco Police Department. The second movie in this Marvel storyline is expected to gross 500 – 800 million dollars. The first “Ant-Man” film grossed around 500 million dollars. The movie will be released July 6th, 2018. Also coming up, Bobby Cannavale will be in “The Irishman,” which comes out in 2019. The movie is a biographical crime film where Cannavale will be playing the role of Joe Gallo. His character is based on the real-life Joe Gallo, who was a popular New York City gangster. It is expected to be released by Netflix. 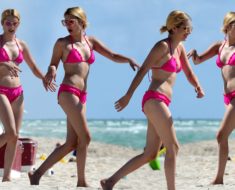